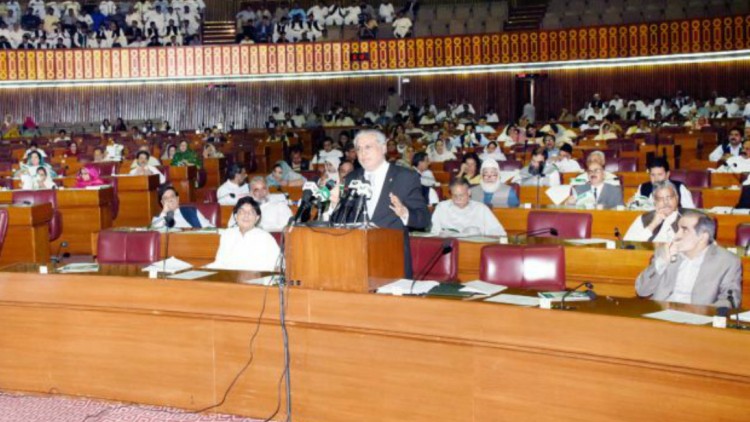 The PML-N government has unveiled its fourth budget on Friday, June 3 2016 with a total outlay of Rs 4.42 trillion for the fiscal year 2016-17, indicating 7 percent increase over the outgoing fiscal year. This is a deficit budget with Rs 1.2 trillion gap in income and expenditure. The government once again has set an ambitious growth target at 5.7 percent for the next fiscal year.

Following are the highlights of the budget

• Government has announced a 20 percent increase in the PSDP allocation with Rs1.675 trillion set aside for FY16-17, of which the Federal PSDP makes up Rs800 billion.

• The development expenditure outside PSDP has been estimated at Rs 156.6 billion in the current budget.

• This year the government has allocated Rs24.95 billion for health sector.

• The government has allocated Rs108.9 billion for education in the new fiscal year.

• The government will spend Rs32 billion on new water resources.

• Government has allocated 188 billion for the construction of highways, bridges and flyovers.

• The government has allocated Rs.14 billion for the procurement / manufacture of new locomotive engines.

The government has announced following relief measures for the agriculture sector

• Off-peak tariff for agriculture tube wells will go down from Rs8.85 per unit to Rs5.35 per unit.

• Rs26 billion subsidy would be given on Urea and 10 billion on DAP.

• 5 percent duty reduced to 2 percent on import of machinery for dairy, livestock and poultry sectors.

• Duty of 7 percent on pesticides has been abolished.

• The tax exemption on investment in green-field industrial undertakings is extended to June 2019.

• The tax credit for making sales to registered persons enhanced to 3 percent from 2.5 percent.

• Customs duty on imports of parts of LED lights has been reduced from 20 percent to 5 percent.

• Sales tax has been exempted on import of dumper trucks for Thar Coal.

• The corporate tax rate has been reduced to 31 percent.

• Individuals having taxable income less than Rs1 million have been give a tax relief equal to 5 percent of school fee up to Rs60, 000 per child per annum.

• The minimum tax for large trading houses has been reduced to 0.5 percent from 1 percent of the entire turnover up to tax year 2019.

• Sales tax exempted on the import of laptops and PCs.

The breakup of the new tax shows an amount of Rs145 billion worth income tax measures, Rs45 billion of sales tax and FED and Rs14 billion customs duty.

• Customs duty on import of eggs and chicken rose to 11 percent.

• The government imposed regulatory duty of 25 percent on powdered milk.